Who Am I - A New Documentary 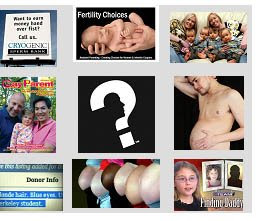 A new documentary called "Who Am I" is currently being researched by the people at Juggernaut Media. They are currently calling for interested donor conceived offspring from around the world that may be interested in telling their story. The difference between this documentary and all of the previous ones associated with DC is that this one is to be presented from the perspective of the conceived people themselves. This is very exciting and will make for ground breaking television in this field. The following is an advertisement calling for interest in this project:

How do you define identity? What role, if any, has genetics played in shaping the person you are today?

We’re SEEKING DONOR OFFSPRING to participate in an international high end documentary series on Assisted Reproductive Technology and the link between biological and genetic history and identity. What makes this documentary series unique is that it is told through the eyes of the offspring conceived through ART; your EYES.
We want to hear your stories; your perspectives; your insights into the impact of the technology that helped bring you into this world and your vision for the future.

Please allow us to introduce ourselves:
Tammi Michelle Faraday is a Television, Feature Film & Documentary Producer, Investigative journalist, Human Rights Lobbyist, Television Presenter, Broadcaster, and one time Senior Associate of an international law firm. Tammi recently returned to Australia after being based in London for two years working as a producer on critically acclaimed and award winning feature films and feature length documentaries for the BBC (UK), WGBH (United States), SBS (Australia) and Channel 2 (Israel). These include: "The Insurgency” (a BBC/WGBH feature length documentary about the Iraqi insurgency); “The Nuclear Wal-Mart" (a BBC Panorama investigation about the private international nuclear network); “Yitzchak Rabin - Case Unclosed" (a groundbreaking documentary on the late Prime Minister of Israel); “Rape on Trial" (a BBC Panorama investigation about rape and the criminal justice system in the UK) and the multi award winning feature film in Australia, “Wil".
In 2008 Tammi launched her international film production, media and communications company - Juggernaut Media Management.
Ros Tatarka is an established producer with an extensive track record primarily in television production. In her early career Ros worked on some of Australia’s most iconic television dramas including Prisoner, Neighbours and A Country Practice. She later went on to Associate Produce the mini-series Snowy and the first nine telemovies of the successful Halifaxfp franchise. As Producer her credits include the first series of Something In the Air, and the telemovie and first series of Good Guys Bad Guys, for which she won an AFI Award.
Ros was most recently engaged as the General Manager, Industry Development and Investment at the State Government Agency, Film Victoria. In this role, Ros headed up the business unit responsible for stimulating and supporting growth and excellence in the Victorian screen industry.
In 2008 Ros returned to the independent sector and through her production company, CreatEve Pty Ltd, is developing a slate of projects including feature film, television drama, documentary and new media.