The occupy movement has made some pretty impressive social statements, including the "I am the 99%" campaign showing how they have been affected by the 1% of people with power and money. Some of my fellow offspring and adopted friends have been using the same statement to highlight how their lives have been adversely affected by those of the 1%. So what the hell, here is my take.
But first, why the Wolverine mutton chops? Well it is Choptober (just like Movember but slightly different). And as a prop to link in with the character Wolverine who was created by scientists in the lab. I too was created in a lab, except by clinicians masquerading as scientists.
The 99% ties in with donor conception because the majority will never know they are donor conceived, and the vast majority of those that do, they were conceived under anonymity clauses, which would mean that about 99% of us will never know our entire family and who our fathers or mother are. It is also the 1%, the powerful and rich, in this instance the fertility industry and legislators that have taken away our basic human rights.
(Side note: The declassified adoptee called it the Identity Movement. Initially I thought that that title missed a lot of the other components such as kinship, health histories etc. However, if we consider it as applying to the identity of our forebears than it encapsulates all of those other things and makes perfect sense. Go the Identity Movement!) 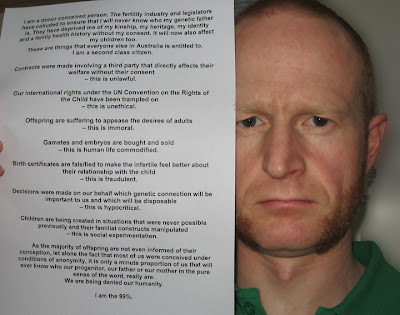 I am a donor conceived person. The fertility industry and legislators have colluded to ensure that I will never know who my genetic father is. They have deprived me of my kinship, my heritage, my identity and a family health history without my consent. It will now also affect my children too.
These are things that everyone else in Australia is entitled to.
I am a second class citizen.

Contracts were made involving a third party that directly affects their welfare without their consent
– this is unlawful.


Our international rights under the UN Convention on the Rights of the Child have been trampled on
– this is unethical.


Offspring are suffering to appease the desires of adults
– this is immoral.


Gametes and embryos are bought and sold
– this is human life commodified.


Birth certificates are falsified to make the infertile feel better about their relationship with the child
– this is fraudulent.


Decisions were made on our behalf which genetic connection will be important to us and which will be disposable
– this is hypocritical.


Children are being created in situations that were never possible previously and their familial constructs manipulated
– this is social experimentation.

As the majority of offspring are not even informed of their conception, let alone the fact that most of us were conceived under conditions of anonymity, it is only a minute proportion of us that will ever know who our progenitor, our father or our mother in the pure sense of the word, really are.
We are being denied our humanity.
I am the 99%.
Posted by damianhadams at 3:18 PM

The above photo, and Lindsay's, can also be found in the trailer to the new doco called "Anonymous Fathers Day".
http://www.youtube.com/watch?v=xBdjLtQJmMI&feature=youtu.be&hd=1

Your words express perfectly why I am opposed to donor conception.