The national governing body in the UK for controlling fertility treatment, the HFEA has statistics on the number of new donors of sperm and eggs to register and donate with clinics since 1992.
http://www.hfea.gov.uk/3411.html
These figures only show new donors and do not account for existing donors that may still be donating their gametes. We must bear in mind that donor anonymity ended in the UK in April 2005. Since that time the number of new sperm donors has gone from 250 to 384 in 2008. While egg donations (which has typically been associated with greater levels of altruism and less of a concern of anonymity), has gone from 923 (2005) to 1084 (2008), albeit with a drop in numbers during 2006. What the graph and figures show is that while the donor numbers can rise and fall over time, that since 2005 when anonymity ended, that the numbers of donors have increased and not decreased as we are made to believe by the lies that are perpetuated by some clinicians/clinics and the media at large that the removal of anonymity will cause a dearth of available procreative material for the needy. 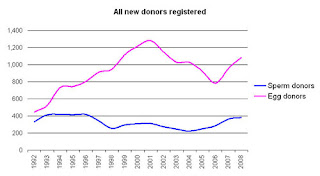 Posted by damianhadams at 4:10 PM

Situation for donor cost is different is some countries like Spain then UK. Not much cost they can get even. Why does this difference exist?
benenden ivf